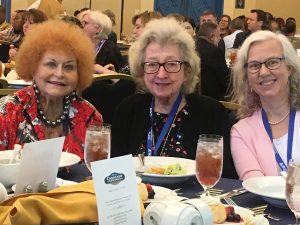 There were more than 1,800 attendees at the 2019 conference of the American Association for the Treatment of Opioid Dependence (AATOD), held October 19-23 at the Coronado Springs Resort in Orlando, Florida.

Why was it memorable? Yes, it was Disney. Yes, the exhibit hall was splendid. And yes, the awards banquet was an experience for attendees to savor.

But the five-day meeting was also full of information─so much that it was hard to keep track of it all. We got our exercise running (sometimes, literally) from room to room, listening and learning, but there was also time to sit down with leaders at the policy luncheon and the international luncheon.

The AATOD conference is a very carefully developed event. We go to many conferences in the field, and to AATOD every 18 months, and the “buzz” at AATOD is the loudest. Regardless of society’s attitude toward opioid treatment programs (OTPs), AATOD makes sure OTP staff, patients, and all attendees are well treated, by the hotel venues and by everyone involved. There is never even a hint of stigma. The conferences are an opportunity to show pride in methadone, naltrexone, buprenorphine, and comprehensive treatment of opioid use disorder (OUD). Talley Management has run AATOD conferences continuously, and is meticulous about the attendee experience, we know from past conferences.

“It takes a long time to plan these meetings,” said Mark Parrino, MPA, AATOD president, in an interview with AT Forum. “We start with a blank canvas, and over the course of 15 months, the conference committee works to create a really fine painting.”

The conference isn’t just a chance to socialize. Ever since the inaugural conference in 1984, Mr. Parrino has used the event for organizing and development. “The field has evolved,” he said. “I think our conference doesn’t just trace that evolution; it leads it. I marvel at the fact that we can do this.”

The conference theme and title─“Out of the Shadows: Managing the Opioid Epidemic through the Continuum of Care”─reflect the fact that finally a light is being shined on OTPs and OUD treatment─a good light. 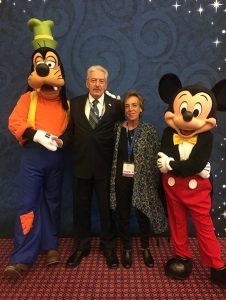 There are now more than 1,700 OTPs in the United States, up from 1,400 in 2017. Once the Medicare benefit takes effect, even more people will enter─and stay in─treatment.

Another kind of growth cited by Mr. Parrino is represented by expanded hours in a given facility─in the case of Community Medical Services of Phoenix, being open 24 hours a day, 7 days a week (https://atforum.com/2017/12/24-7-access-otps-arizona-federal-str-funds/). “The problem is trouble with community approval,” said Mr. Parrino. This includes politicians, one of whom, he said, has been hounding the facility to death. (This is more NIMBY.)

Starting in January, Medicare will, for the first time, cover treatment in an OTP. The fee schedule, announced by the Centers for Medicare and Medicaid Services (CMS) last fall, has been revised in response to AATOD’s request.

“CMS Medicare did heed our [AATOD’s] guidance and change the fee schedule,” Mr. Parrino said. “It went from the proposed $133 [a week] to $207.” Regional schedules are expected to be published in December (Medicare adjusts rates based on cost of living).

This doesn’t mean everything is rosy. “I have many things to be suspicious about,” said Mr. Parrino. He cited examples: “I’m mystified that Wyoming has no OTP. And has West Virginia lifted its moratorium on new OTPs? No.”

The big negative is the move to do away with 42 CFR Part 2, the regulation protecting confidentiality for substance use disorder patients. In particular, SAMHSA is proposing to allow OTPs to put patient information, including methadone treatment, into the PDMP (https://atforum.com/2019/10/aatod-concerned-about-samhsa-proposal-to-drop-pdmp-restriction/). This would discourage patients from entering and staying in treatment, as their methadone information would become available without their consent to health care providers and systems, and, as the PDMP scope increases, to drug enforcement authorities.

Finally, Mr. Parrino is concerned about the “medication-first” approach to treat opioid use disorder–not that it be medication-first, but that it end up as medication only, with no comprehensive treatment. It applies only to buprenorphine, not methadone, in terms of clinical reality.

Some providers and legislators want to eliminate any restrictions on buprenorphine. The result would be more patients having access to more treatment, but that could backfire because without comprehensive treatment, people with addiction can continue to have problems with other substances, such as benzodiazepines, methamphetamine, and alcohol.

At the policy lunch, Mr. Parrino had this to say about medication-first: “Magical thinking is good if you’re under age six and wearing the mouse ears in Disney. But it’s not good if you are over 40 and making policy decisions.”

That sounded light-hearted, but anyone who knows Mr. Parrino, and the tremendous barriers he has had to overcome on behalf of AATOD and OTPs, knows that he has done so with wit, humor, diplomacy, and honesty.

The other side of the coin is that, at last, public sentiment is heading towards expanding access to treatment. Mr. Parrino is encouraged by a more general and encouraging view about expanding treatment itself.

There was a much smaller presence from SAMHSA at the AATOD conference than usual.

However, two top officials were there, both for the entire conference: Louis Trevisan, MD, the new director of SAMHSA’s Center for Substance Abuse Treatment (CSAT), and Tracy Weymouth, MA, director of SAMHSA’s Division of Pharmacologic Therapies. Dr. Trevisan was outgoing and helpful to attendees, many of whom had specific questions about grants. It was also valuable to hear his personal experiences and beliefs as a clinician; for example, he thinks telemedicine works perfectly with psychotherapy, that the patient does not need to be in the physician’s office.

The presence of the two officials must have been a carefully made decision by SAMHSA director Elinore McCance-Katz, MD, PhD, who would not have let them both go unless she specifically wanted them there. The fact that Dr. Trevisan, a new federal employee, was permitted to speak at the policy luncheon, as well as addressing the full conference, was refreshing. And Ms. Weymouth, also a new employee, has good experience as the Maine SOTA.

It was also helpful for the DEA’s Mr. Miller to stay around instead of leaving immediately after the open board meeting.

SAMHSA did cancel the SOTA training it usually supports on the opening Saturday of the conference. It appears that Dr. McCance-Katz does not think SAMHSA money should go to fund conferences.

Ute Gazioch, director of substance abuse and mental health for the Florida Department of Children and Families, is the single state authority (SSA) for the state. She reported on what Florida did with its STR grant: $27 million, running from May 2017 through April 2019: 13,000 individuals received medication-assisted treatment, 55% with buprenorphine, 34% with methadone, and 11% with Vivitrol (extended release naltrexone).

But, she said, “more than half of the people who present for treatment are kicked out or drop out.” Treatment, she said, needs to do a better job of engaging and retaining patients.