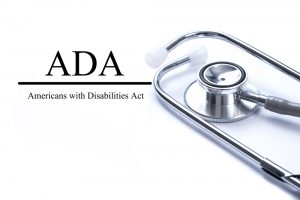 Patients in opioid treatment programs (OTPs) are protected under the Americans with Disabilities Act (ADA). This means that an employer can’t refuse to hire them just because they are in treatment with methadone. It means that towns can’t enact anti-OTP ordinances that make it impossible to site facilities. Do these things still happen? Yes, but the ADA protects against it.

That’s the legal reason for calling yourself a person with a disability if you’re a methadone patient. But there’s another reason—a very powerful human one: many methadone patients don’t see themselves as “disabled” and don’t want to be labeled as such. In fact, they see themselves for what they are: proudly able and proud of their recovery.

“I understand the sensitivity in approaching this,” Mark W. Parrino, MPH, president of the American Association for the Treatment of Opioid Dependence (AATOD), told AT Forum. “Patients who are stable do not want to have the label ‘disability’ attached to them. But,” he said, “it’s a matter of law for good reason,” noting that the label protects patients against discrimination.

Mr. Parrino compared the use of the word “disability” to the use of “client” instead of “patient.” Some programs use the word “client,” believing that it is less stigmatizing than the word “patient,” he said. But he pointed out that the National Alliance for Medication Assisted Recovery (NAMA) prefers “patient,” “because a patient has rights.”

Individuals with other disabilities don’t like the word either because they do not perceive of themselves as “disabled.”

“When you look at the literature on disability, it becomes clear that the perceptions of other people impose the biggest limitations on those with disabling conditions,” said Ellen Weber, vice president with the Legal Action Center.

In fact, perception is a key principle of the ADA. “It’s the perception of others that creates limitations, rather than the individual’s health condition,” said Ms. Weber. Under the ADA, anyone who is perceived as having a mental or physical impairment—even if they do not in fact have one—is still protected against discrimination.

“Because decision makers, as well as the general public, have biases, are uninformed about the ability of individuals with physical and mental impairments, and have prejudicial views, the ADA is needed,” said Ms. Weber. “But that doesn’t mean that because you’re protected by this law, you consider yourself to be disabled.”

There’s another definition of disability, used by the Social Security Administration, which will support people who are unable to work (and thanks to a bad decision by Congress, people with substance use disorders are ineligible, if that is their primary disability).

“I understand the patient’s perspective,” said Mr. Parrino. “A legal term is different from a personal sense, in which a patient might ask, ‘What do you mean, I’m disabled?’”

Walter Ginter, CMA, project director for the MARS Statewide Network, and a patient advocate, sympathizes, but stressed that the ADA is essential. “I understand why patients do not want to be considered disabled—they want to be viewed like everyone else in society,” he told AT Forum. “But the fact is, methadone and buprenorphine patients aren’t like others. We have a chronic disease that for some bizarre reason can only be treated in OTPs or federally licensed DATA 2000 practices,” he said, which is itself a handicap, in his view.

“As long as the government is going to handicap us in a way that they do not handicap people with any other chronic disease, the least, and I mean that, the least, the government can do is make up for this discrimination by giving us the minimal protections available to other persons, under the ADA.”